As we watched the confirmation hearings of Amy Coney Barrett for Ruth Bader Ginsberg’s Supreme Court seat this week, she deftly dodged tough questions by Democratic members of the Senate Judiciary Committee by, well, refusing to answer.

We also learned during the hearings that she subscribes to the “originalist” theory of constitutional law.

Originalism, as Barrett explained, is the belief “constitutional text means what it did at the time it was ratified and that this original public meaning is authoritative.” Translated, originalists say they are bound by the words of the Constitution, and the meaning of those words should be determined solely based on how they were understood when they were added to the Constitution.

Claiming that she has been unfairly branded as anti-health care, Amy Coney Barrett testified that she strongly supports all medical treatments that were available in the year the United States Constitution was written.

Like her role model, Antonin Scalia, Barrett said that she considers herself a “strict originalist” and therefore advocates only the health-care practices that the Framers of the Constitution used in 1787.

“For example, the best cure for headaches, fevers, and agues is arsenic, a wondrous elixir prescribed by many a Doctor of Physick,” she said. “ ’Twill serve.”

As for preëxisting conditions, Barrett said that she only acknowledges maladies that preëxisted the late eighteenth century, such as dropsy, King’s Evil, and scrivener’s palsy. “The obvious first question is will Gov. Ricketts, Reps. Bacon and Fortenberry along with the Republican Party condemn Sasse publicly for his words against Trump or will they sit by in silence showing Nebraskans that they too share Sasse’s words about the reckless behavior of Trump?,” Kleeb said.

“Ben Sasse, who has all but stood silent during Trump’s reckless time in office, is now distancing himself from the president. Saying these words now, when it seems safe for Sasse, will not erase the years Sasse was complicit in the horrendous behavior and actions of Trump. Voters can write-in Preston Love. We can send a message to Sasse his words are too little, too late,” Kleeb said.

Background: The statements made about Trump by Sasse were published in the Washington Examiner: 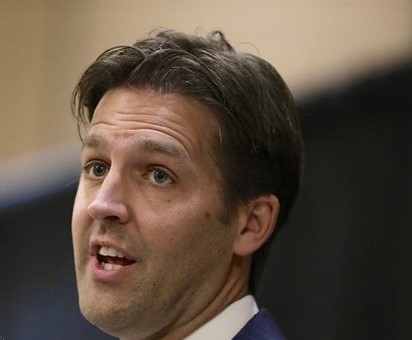 There is still time to sign up for our 100,000 Calls Across Nebraska — which end on Sunday, Oct. 18. We need your help turning out voters to support Biden-Harris, Kara Eastman, Kate Bolz, Preston Love and other strong Democrats! ***
If you have any questions about voting, including how to register to vote or request a Vote-by-Mail ballot, simply visit the NDP Voting Center.

If you missed our Yard Sign Drive-Thru event in your area, you can still pick up Biden-Harris signs at our Lincoln and Omaha offices on Tuesday and Thursdays!

We ask for a $20 donation for yard signs or that you take a packet of postcards to fill out and send to voters. You can help us elect Democrats by writing postcards to voters!

We have several options:

Create your own postcards and we will email you a list of names.

Pick up a packet at one of our offices:

If you are in greater Nebraska and want to involve a few friends, we can mail a packet with a larger number of postcards and names.

You also can write postcards to voters while we watch the last Presidential Debate. Sign up here if you’d like to join our zoom call during the debate:.

Sign up for a training to be an Election Day Poll Watcher!

On Election Day, our volunteers will be on the ground at priority polling places in Nebraska’s competitive Second District (Douglas and Sarpy Counties) to monitor election administration and ensure that everyone qualified gets to cast their vote. All poll watchers must attend a training. Sign up here for one of our upcoming virtual training sessions coming up soon on: Saturday, October 17, 1 to-2:30 p.m.; Tuesday, October 20, 7 to 8:30 p.m.; Thursday, October 22, 7 to 8:30 p.m. and Sunday, October 25, 3 to 4:30 p.m. The NDP has started a series of Welcome-to-the-Party online events geared to new voters. We will answer all your questions about voting and how to get involved. You can type your questions in the chat or ask them live. 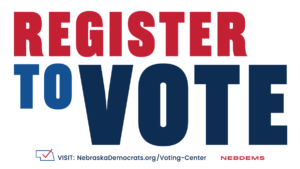 ***
We leave you this week with a rendering by Steve Benson.