CNN’s Mark Knoller, a veteran CBS News White House correspondent who is known for tracking presidential activities, says President Trump has spent all or part of 248 days at a golf course. CNN’s own count has Trump at 266 days spending some time at a Trump golf course.

So Dr. Anthony Fauci figures the Duffer in Chief should just keep golfing, which was “documented” by The New Yorker’s Andy Borowitz (tongue firmly planted in cheek):

Sharply disagreeing with critics of Donald J. Trump’s weekend visit to the Trump National Golf Club, Dr. Anthony Fauci has urged Trump to remain on the golf course until the pandemic is over.

“The people who are giving you a hard time about your golf trip are just haters,” Fauci told Trump on Sunday. “It’s in the best interest of everyone in the country that you keep golfing, Mr. President.”

Trump was reportedly surprised by the doctor’s words of encouragement, especially because the golf trip had limited the President’s ability to communicate with Fauci, the Centers for Disease Control, and other scientists involved in the coronavirus response.

Fauci also recommended that Trump throw away his phone, stop talking to the press, and not tell anyone about the great idea he had on the golf course about using lawn fertilizer to protect people from the coronavirus.

The Washington Post’s Katrina vanden Heuvel penned a nice column this week titled “Lessons from Nebraska that show how progressive candidates can win.” She focused on two leaders in our party-leading efforts to bring voters to the table, Chair Jane Kleeb and the next Congresswoman from CD2, Kara Eastman.

Even in places where Democrats didn’t win big in 2018, Medicaid expansion did. In Idaho, Nebraska and Utah, hundreds of thousands of Americans voted to expand public insurance programs. Jane Kleeb, the chair of Nebraska’s Democratic Party, explains in her book “Harvest the Vote: How Democrats Can Win Again in Rural America”: “A deep sense of fairness is at the core of America’s rural communities. Progressive and populist roots run deep in rural communities.” A message from Sharlette Schwenninger, chair of the NDP’s Women’s Caucus:

Three $500 scholarships will go to women who are active in their communities and progressive politics, one in each Congressional District. Applications are limited to Nebraska Democratic women who are: 1) graduating from high school in 2020 and will be attending college, or 2) are currently continuing in their higher education.

Applications must be submitted by July 1, 2020.

Thanks for helping to spread the word. If you have questions, please email [email protected].

The Nebraska Democratic Party stands with state Sen. Kate Bolz and Kara Eastman as they aim to make history in the November election.

Nebraska has never sent a Democratic woman to Congress. We now have a great opportunity to send TWO: Eastman in C2 and Bolz in CD1.

“Kara dedicated the last decade of her life ensuring lead was not poisoning our kids in Omaha,” said NDP Chair Jane Kleeb. “When she walks the halls of Congress, it won’t be to cut deals for a select few — she is running for climate action and healthcare for all Nebraskans. Kara will make history as the first woman in the House representing the Second Congressional District.

“Senator Bolz is a daughter of the district, growing up on her family farm and serving the people of our state in the legislature for eight years,” Kleeb said. “Our family farmers and ranchers along with the growing city of Lincoln interests will finally be served when Bolz makes history as the only woman to represent the First Congressional District.” 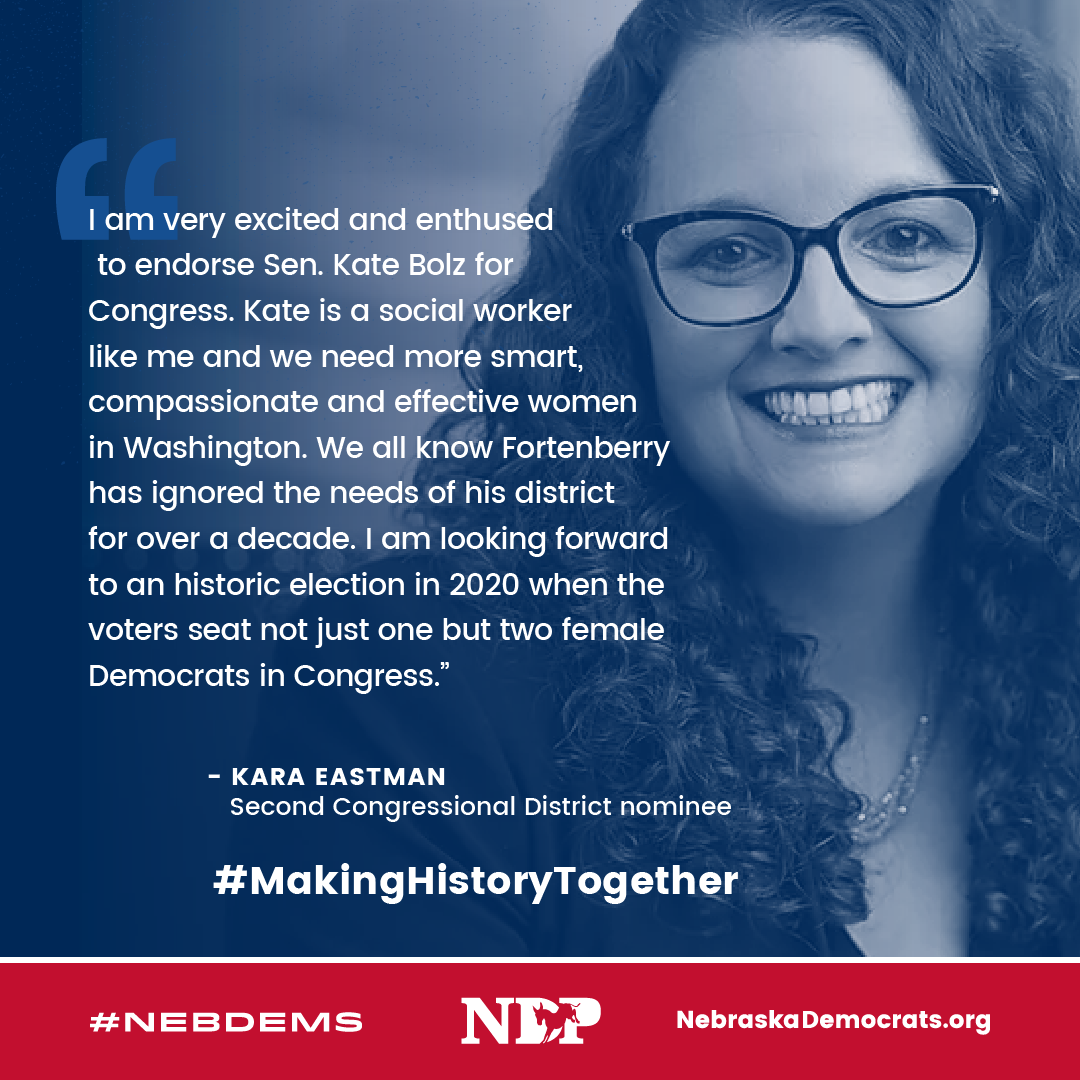 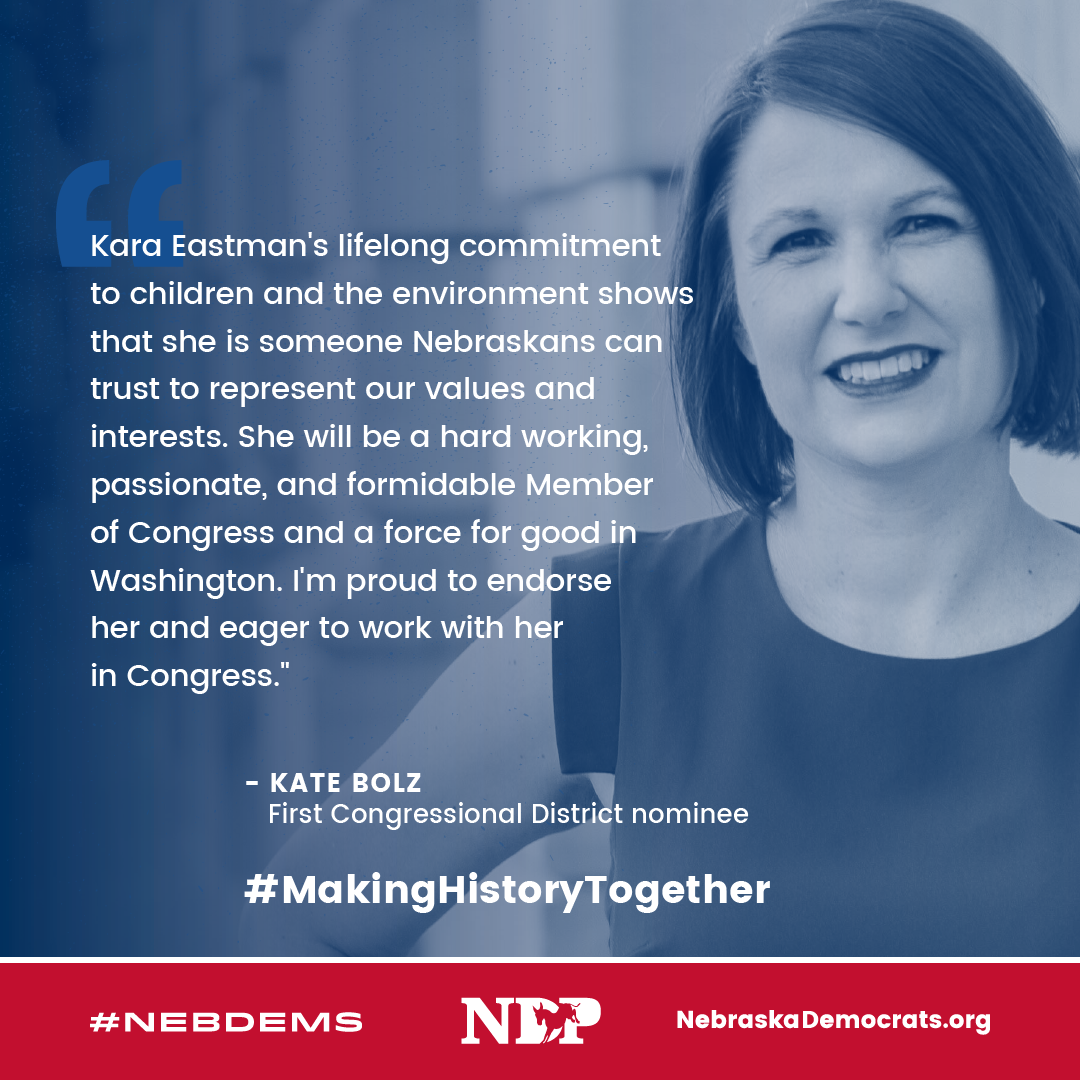 The NDP State Convention is coming up June 14. It will be held online.

You can read the proposed platform here.

As Trump’s bungling of the coronavirus pandemic chugs along, we leave you this week with a rendering by Mike Luckovich about Trump’s repeated retweeting of a ridiculous and unfounded conspiracy theory that MSNBC host and former Rep. Joe Scarborough murdered an intern, despite pleas from the woman’s husband that he stop.