Well, it was another dizzying week in Washington D.C., which culminated with the House voting to open formal impeachment proceedings against President Trump.

And despite the mounting mountain of damning evidence against Trump, ALL the GOP House members — we see you Don Bacon, Jeff Fortenberry and Adrian Smith — voted against the resolution.

It is time again to turn to our favorite political opiner, Esquire’s Charles Pierce, for wisdom.

The Train, it has left the station.

Thursday morning, after a mercifully brief debate that nonetheless contained its share of crazy, the House of Representatives approved a resolution setting the rules and procedures for the process of impeaching the President* of the United States.

The vote was nearly straight party-line, 232-196. Along the way, we learned the following:

House Republican leader Kevin McCarthy is such a perfect specimen of the successful mediocre white man that they ought to stuff him and stand him up in the Smithsonian. Remember, this is the guy who once accused the president* of being paid by Vladimir Putin. He’s also the guy who pretty much admitted that all the fuss over Benghazi, Benghazi, BENGHAZI! pretty much was designed to ding up Hillary Rodham Clinton’s poll numbers. So there are brighter bulbs in the chandelier.

In 2016, the country took a dangerous chance. In 2018, it began the process of correcting that horrific mistake. That process continued on Thursday, and now, it will go forward.

There will be public hearings, and why the Republicans think this will help them is anybody’s guess. Evidence gathered by the House Intelligence Committee will be released. The president* will continue to rant and rave and fuss and fume, on Twitter and at all of his traveling wankfests. But the momentum is all in one direction now. I continue to fear for the nation’s sanity when the Articles of Impeachment get fed into the clown-grinder that is the Republican side of the House Judiciary Committee. (My advice to HJC chairman Jerry Nadler? Get plenty of rest. The Ka-ray-zee Kaukus is coming for you.) Back in Nebraska, we Democrats are still basking in the success of the NDP’s Big Blue Weekend — which was highlighted by a speech by House Speaker Nancy Pelosi at the annual Exon Morrison Fundraiser.

Toward the end of her comments, she addressed the elephant in the room: The impeachment proceedings. On a related note, you can see the video of those honored at our Morrison Exon Fundraiser with our 2019 Annual Volunteer Awards, when we celebrate the volunteers and elected leaders who build and grow the Nebraska Democratic Party.

The award winners’ individual videos can be found in the Videos section of our Facebook Page under “2019 Morrison Exon Volunteer Awards.” All hands on deck!

Sunday marks the one-year-out date for the 2020 election.

We’re already busy helping get Democrats elected, but we need your help.

When you sign up to be a Block Captain, you agree to canvass 50 houses in your neighborhood. This is a commitment of about two hours each time you knock your 50 doors.

This is the BEST WAY you can help elect Democrats.

Speaker Pelosi said during her remarks at the NDP’s Morrison Exon Fundraiser last weekend that our Block Captain program “is a model to the country. I hope all of you are participating in the Block Captain initiative.” 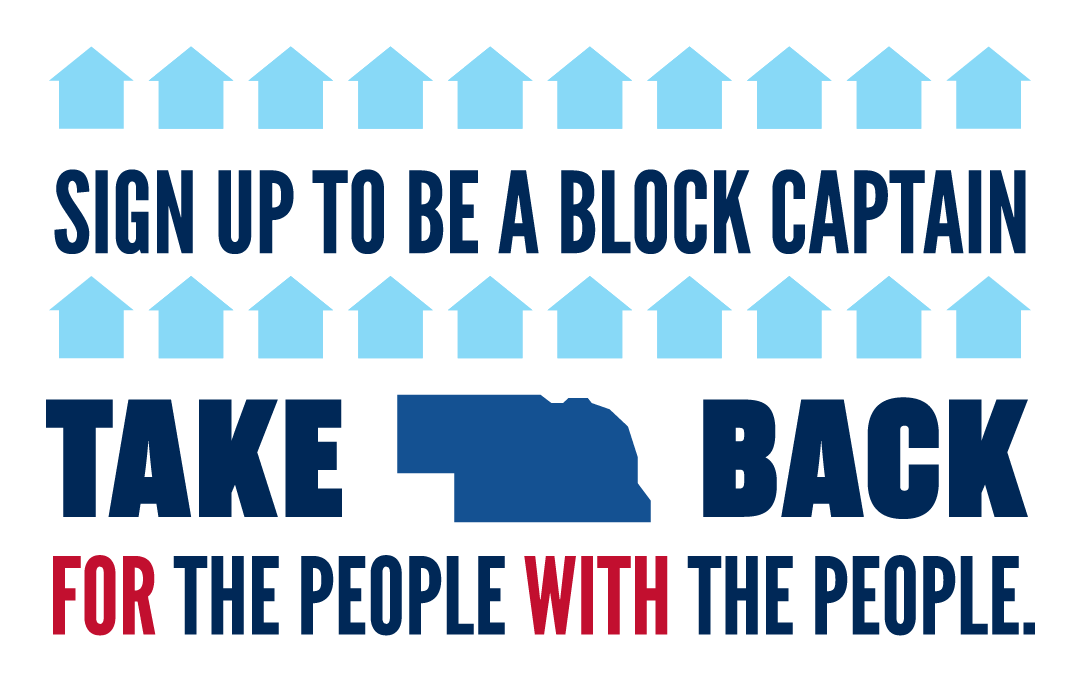 We leave you this week with a rendering from Mike Luckovich on Facebook CEO Mark Zukerberg’s stance to permit politicians to lie with impunity in Facebook ads.