In schools and workplaces across our state, my friends and peers are now at-risk of being ripped away from their families. All so Pres. Trump can please his extreme-right base.

In Nebraska, 3,371 Dreamers live, work and love, right here in our state. As a Democratic Party grassroots organizer, I work to elect candidates who stand up for Dreamers.

Can you donate $3 to show Nebraska we care about electing good Democrats who will stand up to Trump at the federal and state level?

The Deferred Action Childhood Arrivals (DACA) program was created by Pres. Obama in 2012 and protects nearly 800,000 young people that were brought to the United States by their parents.

In Nebraska, 3,371 young immigrants live, work and learn in our big cities and small towns. Dreamers are educated here, raised here, and love this country, yet they are under attack from a President that is trying to score political points with the extreme-right base instead of doing what is right.

Can you donate $3 to show Nebraska we care about elected good Democrats who will stand up to Trump at the federal and state level?

We can not sit here and watch Republicans hurting our friends and families.

On Tuesday, Sept. 5–on the west side steps of the State Capitol at noon—join nonprofits rallying to support Dreamers. Let’s show up as Democrats to stand with them.

As Democrats, we must all pull together and elect more Democrats to protect our communities.

“The actions taken today by President Trump to end the DACA program are both shameful and short sighted. There are more than 3,000 DACA youth that live, study, work, and pay taxes in Nebraska today. We must remember that DACA youth arrived in the United States as children, through no actions or choice of their own. We can’t turn our backs on them. We must stand by the educational, economic, and community investments we have made in these young people and their families. And we must acknowledge both the talent investment and the economic impact they have on our local economies. We call on Congress to respond to the President’s decision to end the educational and career dreams of DACA youth. The House and Senate must step up and immediately pass the Bridge Act to legislatively reinstate DACA.” -Senator Tony Vargas, Metro Community College Board of Governors Chair Roger Garcia, and Omaha Public Schools Board Members Amanda Ryan and Tracy Casady

“Incredibly dismayed at reports that President Trump’s will send our young people away after they’ve spent much of their young lives here. Our state and our communities have invested in these men and women as they’ve attended our great public schools, played alongside our sons and daughters and become our neighbors. Our state’s businesses depend on the future workforce to continue to thrive — and Trump’s actions put that future in jeopardy. As the Senator for all Nebraskans, I will #DefendDACA.” -Jane Raybould, Candidate for US Senate

“I am a Native American, a landlord of this country!  How can I not be outraged by a President, whose forebears came across a wide ocean, who maligns those who came across a small river…. seeking to live, to grow and to be an American!  Especially when those who came north across that small river were brown like me…..and indigenous!  Perhaps it is time for us to cancel Donald Trump’s lease!  He needs to go back where he came from!”  –Frank LaMere, Nebraska Democratic Party Associate Chair

“The end of DACA is reprehensible and beyond tragic for our country. There are more than 3,000 DACA youth in Nebraska and nearly 800,000 in our country that live, study, work, worship and pay taxes that greatly benefit our economy and our society. Good, decent and hardworking families will be torn apart. American businesses will lose valuable employees, and America will lose so many individuals who love this country and call it home. I call on our federal representatives in Congress to do the right thing and come together to pass legislation that will protect DACA recipients. Trump’s decision to rescind DACA is immoral and Congress must act immediately to protect DRE a.m. ers.” –Zachary Mora James, Lincoln Airport Authority Board Member

“The politics being played by the administration make it crystal clear that Congress must get back to work and pass comprehensive immigration reform,” Ashford said. “Otherwise Dreamers will always be subject to the whims of the executive branch. I support the existing DACA and oppose the efforts by the administration to repeal it. Its threatened repeal underlines the need for Congressional action, through immigration reform and providing pathways to citizenship to include Dreamers and other undocumented individuals. There is an amendment that will be offered by Representative Schiff (CA-28) that I fully support. The amendment calls for the prohibition of any funds that would be used for the deportation of individuals that fall under DACA. I will continue to make this call as it is the right thing to do for Dreamers and our community.” -Brad Ashford, Candidate for Nebraska’s 2nd Congressional District

“Dreamers are our neighbors, our colleagues, our small business owners, and our military service members.  Kara Eastman is calling on all members of Congress to fight against this immoral act which will result in $460 billion in GDP loss. Congress should not be bullied into enacting laws that do not represent the values that we as Americans hold near and dear to us.” Kara Eastman, Candidate for Nebraska’s 2nd Congressional District

“As a Democrat, I stand with DACA recipients. Trump’s efforts to repeal DACA will harm hard working Nebraskans, leaving thousands questioning their future.  Republicans want to prevent over 800,000 Dreamers from legally residing in the United States.  I fully oppose this Republican decision. If elected in 2018, I promise to take Congressional action through immigration reform that helps provide clear pathways to citizenship for Dreamers and other undocumented individuals.” -Jessica McClure, Candidate for Nebraska’s 1st Congressional District

“The Dreamers home country is the U.S.  They were brought here as small children by their parents.  The Dreamers are our neighbors, friends & colleagues.  They are an asset to the U.S.   Fortenberry voted to deport the Dreamers.  As a member of Congress, I will protect the Dreamers.” -Dennis Crawford, Candidate for Nebraska’s 1st Congressional District

“DRE a.m. ers are registered, law-abiding young people who grew up here, who attend our schools, who build careers and start businesses here, who put down roots here and make our country, state, and communities stronger. Ending DACA is cruel to people who are here in our country through no decision of their own. It will be a step backward for the United States economically, and is a slap in the face to our values of equality, opportunity, and freedom. Policies like DACA represent our nation at its best–a beacon of hope and opportunity for all people, extending dignity while promoting economic prosperity for all who are willing to work for it. The United States, and Nebraska, will no longer sustain a leadership role in economic and intellectual innovation without welcoming our newest neighbors.” -Megan Hunt, Candidate for Nebraska’s 8th Legislative District

“As a Cold War veteran of the United States Army I can state with absolute certainty, that what President Trump is doing to DACA and Dreamers is deplorable and violates American ideals of basic human rights.  The Attorney General of Nebraska is very callous and ignorant of human history and human geography, specifically with respect to Nebraska’s 150th year of statehood.  As a candidate for the Nebraska Board of Regents, I want to reiterate my stance for civil rights, human rights, and affirmative action for all Americans and for those who seek safety and shelter within this nations boundaries.  Furthermore, I spent years of my life facilitating the fall of the Berlin Wall and working towards freedom for all peoples of the world.  I will do the same for any proposed wall at any American borders.”  -Dr. Larry Bradley, Candidate for Nebraska Board of Regents, District 4

“As you know, Trump made the inhumane and cruel decision to end DACA, a program started under the Obama administration, with a 6 month delay. While the decision is not final yet, around 800,000 DACA beneficiaries across the nation and 3,371 DACA beneficiaries stand to be ripped away from their families and workplaces. Keeping DACA intact is a human rights issue along with being the morally right action to take. As the daughter of an immigrant, I cannot stand by and be silent as an administration chooses to actively go after honest, hardworking young people. Today (Sept. 5th)  at noon, nonprofit groups and others will be gathered at the state capitol to stand with DRE a.m. ers. Will you join in me the fight against ending DACA today?” -Mina Davis, Candidate for Nebraska’s 8th Legislative District

“DRE a.m. ers put their trust in us as Americans. Congress needs to act as compassionate leaders and protect these young immigrants, whose choices were made long before they could choose for themselves. Ending DACA is bad policy. It would create a lasting stain on the values Nebraskans hold dear.” –Jackie Collett, Candidate for Nebraska’s 20th Legislative District 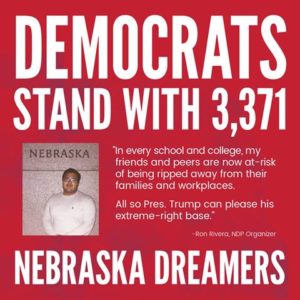