We at the NDP are beyond excited to have House Speaker Nancy Pelosi address our Morrison Exon Fundraiser in Omaha on Oct. 26!

“We are honored to host Speaker Pelosi in Omaha. The NDP is working to deliver that blue dot once again by flipping the Congressional seat red-to-blue and sending our Democratic nominee to the White House with an electoral vote,” said NDP Chair Jane Kleeb. “Speaker Pelosi’s bold leadership and tenacity are unparalleled and vital in this period of chaos and scandal being caused by the Republicans and the Trump administration.”

At the event, we present awards to hard working volunteers and hear from state and national speakers.

The ME dinner is part of our Big Blue Weekend, which also includes a Black Caucus Fundraiser, our State Central Committee meeting and Blue Bench Training with the National Democratic Training Committee for candidates, campaign staff and local party leaders/grassroots activists.

Get more information and tickets for all the events here! It was, to say the least, a rough week for President Trump — what with all that whistleblower and impeachment hoo-ha.

This was not lost on The New Yorker’s Andy Borowitz.

Russian President Vladimir Putin said on Wednesday that he was “saddened and hurt” that Donald J. Trump had asked a different foreign country to meddle in a U.S. election.

“I thought when it came to election meddling that Donald and I were exclusive,” an emotional Putin told reporters. “This feels like a betrayal.”

Putin said that when he read the call summary of the phone conversation between Trump and the President of Ukraine, “I could not believe my eyes. It was just like the conversations Donald and I used to have.”

The Russian leader said that he had considered meddling in the 2020 election to help Trump, but added, “Now I’m not so sure.”

“We had something special, but now that’s gone,” Putin said. “I feel so used.” Sen. Megan Hunt has been nominated for the Tammy Baldwin Breakthrough Award, which is given annually to an up-and-coming state or local LGBTQ+ elected official whose promising political career will move equality forward.

It would be GREAT to bring this award home to a red state! We will be holding a VendorFest and Candidate Briefing this Sunday in Lincoln. This is a training targeted at candidates and campaign staff, but all are welcome. Vendors will participate in best practices panels facilitated by NDP staff and officers. We will also review the Candidate MOU, VAN, Coordinated Campaign and other information needed to run a strong campaign. 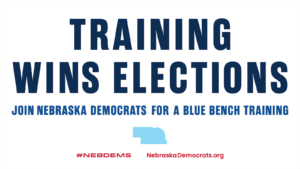 We leave you this week with a rendering from the Mike Luvkovich on the aforementioned Whistleblower complaint that Trump pressured Ukrainian President Volodymyr Zelensky to find dirt on possible 2020 Democratic presidential nominee Joe Biden in order to get U.S. financial aid.