The super-rich and big corporations would be big winners from the Republican House and Senate tax plans, but practically everyone else could be big losers.

NBC News: “An analysis by the center-left Center on Budget and Policy Priorities of the initial House bill found a family of four making $59,000 would get a tax cut of $1,106 next year, but their taxes would actually go up by $453 in 2027 compared to current law.”

Florida, Texas and other areas hit by hurricanes:

The Hill: “Housing groups in Texas and Florida are warning that the House GOP tax bill could hurt post-hurricane rebuilding efforts in the U.S., because the measure eliminates a critical infrastructure financing tool.”

Teachers and their students:

McClatchy: “Teachers often have to spend their own money to provide students with books, pens and pencils, and can get a tax deduction of $250 for their expenses — but there’s no such break in the Republican tax legislation. Both House and Senate tax bills would end the break, and powerful teachers’ unions are mobilizing to fight the proposal.”

CNBC: “Workers over age 50 would no longer be able to make catch-up contributions on a pretax basis to their retirement plans under a new amendment to the GOP’s Senate version of the tax bill.”

Clean and renewable energy (the environment):

Houston Chronicle: “I’m not sure when opposition to clean energy, improved efficiency and pollution became hallmarks of conservatism, but House Republicans are definitely doing everything possible to protect coal and nuclear energy at the expense of natural gas and renewable sources. Some politicians seem to think conservatism is only about conserving the status quo.”

NBC News: “The House tax bill eliminates a deduction for high medical expenses that total over 10 percent of taxpayer income while the Senate bill keeps it in place.”

Washington Post: “The message sent by Republicans in the tax overhaul bill they launched last week is unmistakable and blunt: We think homeowners and home buyers have gotten much too sweet a deal from the federal tax code for far too long — and now we’re going to whack them down. No other major sector of the economy gets hit so hard in the proposal in so many places as homeownership.”

Associated Press: “Millions of Americans would lose the ability to deduct up to $2,500 in student loan interest under the Republican tax bill, a proposal that education advocates say will make college less affordable.”

Washington Post: “House GOP leaders have hailed their new tax proposals as helping the small-business owner, but small-business associations say they help big enterprises, not small ones, and vowed Tuesday to sink the bill in its current form.”

Tax Policy Center: “Taxpayers in the top 1 percent would receive nearly 50 percent of the total benefit; their after-tax income would increase 2.6 percent on average.”

Vox: “Corporations, broadly, are the focus of most of the tax cuts. According to the Joint Committee on Taxation’s analysis of the bill, cutting the corporate tax rate from 35 percent to 20 percent starting in 2019 costs nearly $1.3 trillion over 10 years. Corporations also in many cases gain new, more favorable treatment of income earned abroad, which is either not taxed or taxed at an even lower rate than 20 percent.”

Donald Trump and his family:

Washington Post: “Trump has refused to release his tax returns, making it hard to know precisely how much he would stand to gain from a tax code overhaul. But one change in the House plan affecting only multimillionaires, a repeal of the estate tax, could save his family $1 billion or more.” 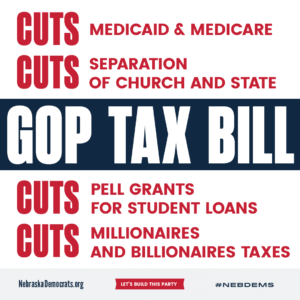