Too stupid to conspire. Too incompetent to obstruct — #NebDems News

While most of us are still trying to figure out how Attorney General Wiliam Barr found no wrongdoing — none, zilch, nada — by President Trump in the Mueller report into Russian interference in the 2016 election, the Washington Post’s Dana Milbank offered some clarity this week.

After two years of investigation, Mueller’s findings about Team Trump can be roughly summarized as follows: Too stupid to conspire. Too incompetent to obstruct.

These findings are entirely consistent with what I’ve found covering the Trump campaign and administration. I’d submit only one addendum: Too dumb to govern.

Many Democrats are disappointed Mueller opted against charging Trump and top aides. But Mueller captured the essence of Trump. Some of Trump’s actions are hateful, some are ideological and some stretch the bounds of constitutionality. But above all, Trump is bumbling.

Federal judges have ruled against the Trump administration at least 63 times so far, an “extraordinary record of legal defeat,” The Post reported last month.

… Now Mueller has documented more of the same. Trump’s campaign was happy to accept help in the election from Russia but didn’t pull it off. Trump wanted to obstruct the investigation but was thwarted by aides. And the man who claimed he had “one of the best memories in the world” said more than three dozen times in response to Mueller’s questions that he couldn’t recall the answer.

So there you have it. But that doesn’t mean any of us will sleep any better. With the announcement that Joe Biden is officially in for 2020, the Democratic field is now up to 20 candidates.

So where do they rank with would-be voters (at least for now)? CNN’s Chris Cillizza and Harry Enten laid it all out in their latest power rankings: The NDP is issuing a Call to Action for all Democrats to participate in the Big Blue Canvass on Saturday, May 4 from 11 a.m. to 4 p.m. CT at the Lancaster County Democratic Party office, 3701 O Street, Lincoln.

You can attend the 11 a.m. to 1 p.m. shift or the 2 p.m. to 4 p.m. shift. Food will be served for both shifts at 1 p.m. We train you before you head out to knock on doors or phone bank. If you can only drop in for an hour, that is great too! We will have postcards for you to write to voters.

Our goal is to have 100 Democrats turn out for our Big Blue Canvass, so sign up today to let us know you will join us.

We’re counting on you! 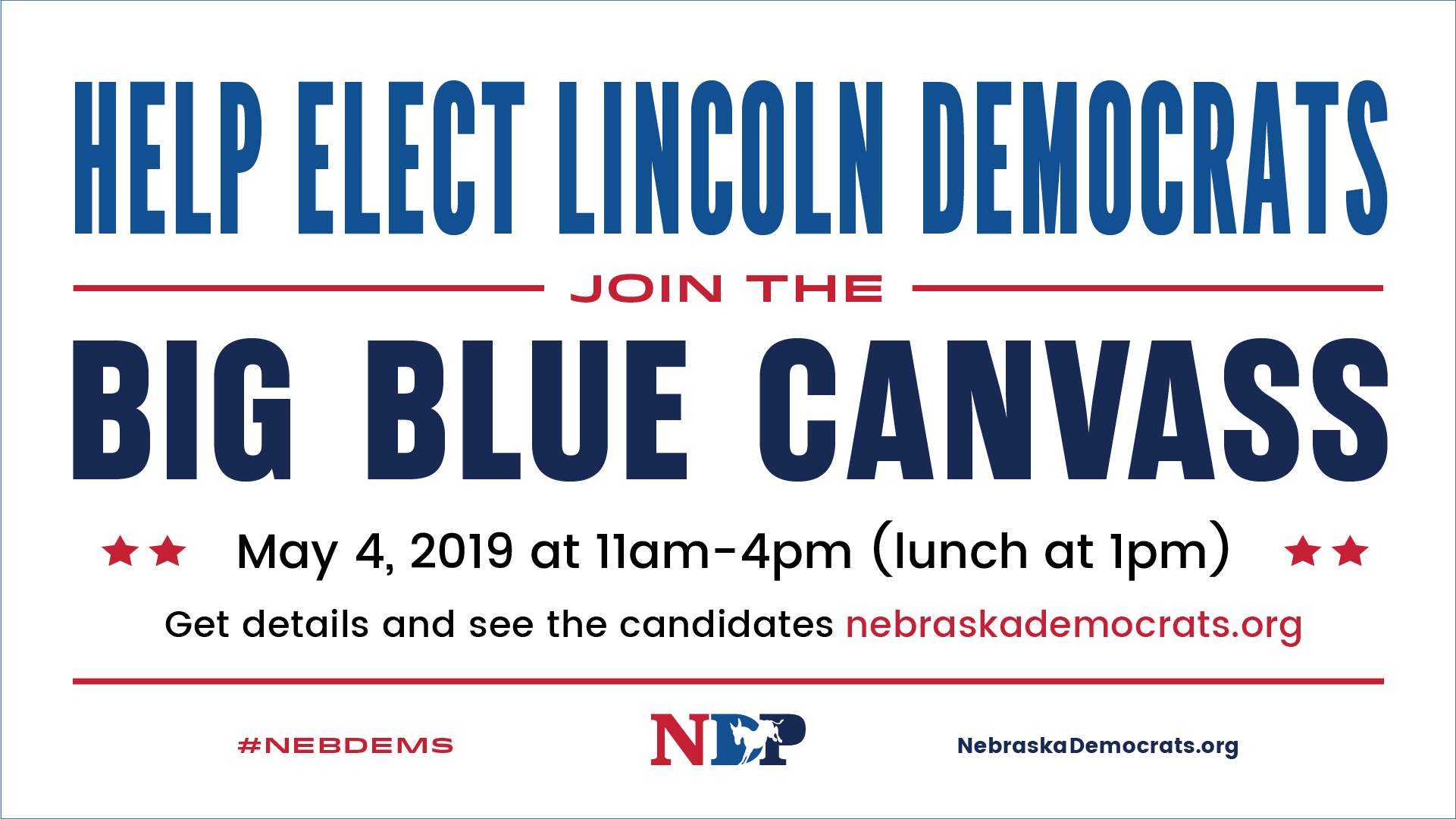 The state’s plan for carrying out voter-approved Medicaid expansion could mean taking away some health care services from about 25,000 low-income Nebraskans, according to the Omaha World-Herald.

That’s because Department of Health and Human Services officials intend to switch some people currently covered by traditional Medicaid into a two-tier system being created for newly eligible Nebraskans. The new system, called the Heritage Health Adult Program, would have different benefits and more stringent requirements than existing Medicaid.

“The two-tier system is not required,” he said. “The state is choosing to add these unnecessary and expensive administrative requirements.”

Anyone else smell a Ricketts here?

NDP Chair Jane Kleeb and Cathy Stewart, vice president for national development at Independent Voting and Director of the Eyes on 2020 campaign, co-wrote a guest editorial on the importance of independent voters that ran this week in the Omaha World-Herald.

If you missed it, you can read it here.

We leave this week with a rendering from the great Clay Jones, who weighed in on Rudy Giuliani’s jabbering defense of Trump after the Mueller report was released.