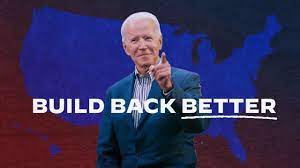 One year ago, with the country at a crossroads, President Biden unveiled his Build Back Better Agenda. Facing a raging pandemic, unprecedented economic downturn, profound climate crisis, and persistent racial injustices, President Biden outlined an ambitious agenda that would position America not just to return to where we were, but to build back better towards a more sustainable, resilient, equitable, and prosperous future. The Build Back Better Agenda includes President Biden’s American Families Plan and key elements of the American Jobs Plan that were not included in the Bipartisan Infrastructure and Investments Act. In Washington, this proposal is known as “reconciliation.” But the bottom line is a plan that will create jobs, cut taxes, and lower costs for working families—all paid for by making the tax code fairer and making the wealthiest and large corporations pay their fair share.

Lower Child Care Costs. Rural children are less likely to be enrolled in pre-K programs than urban and suburban children, and a third of rural children enter kindergarten without having attended pre-K. President Biden’s plan lowers child care costs and makes universal preschool a reality, providing parents access to high-quality programs in the setting of their choice. The Build Back Better Agenda would also institute 12 weeks of paid family and medical leave, to help improve the health of new mothers and reduce wage loss.

Lower Health Care Costs. More than 12 percent of people living in completely rural counties lacked health insurance before President Biden took office, coverage under the Affordable Care Act (even with the ACA’s premium subsidies) was too expensive for many families, and almost 2.2 million people were locked out of coverage because their state refused to expand Medicaid. President Biden’s plan lowers health care costs for those buying coverage through the ACA by extending the American Rescue Plan’s cost savings, providing premium relief that is lowering health insurance costs by an average of $50 per person per month for more than 9 million people.

Lower Higher Education Costs. Education beyond high school is increasingly important to succeed in the 21st-century economy, even as it has become unaffordable for too many families. The Build Back Better Agenda would provide two years of free community college—boosting the earnings of low-wage high school graduates by nearly $6,000 per year. President Biden’s plan also increases the maximum Pell Grant award by almost $1,500, and invests billions in subsidized tuition for low- and middle-income students at Historically Black Colleges and Universities, Tribal Colleges and Universities, and minority-serving institutions.

Lower Housing Costs. One in four rural renters pay over half their income in rent. The Plan’s investments help lower housing costs and increase the supply of affordable housing through tax credits and government financing, including constructing and rehabilitating more than one million sustainable rental housing units and more than 500,000 homes working families can afford. It will also make investments to preserve existing public housing as well as remove lead-based paint from housing units.

Tax Cuts for Families with Children. 16.4 percent of rural people fall below the poverty line, struggling to pay expenses like food, rent, health care and transportation for their families. President Biden’s plan will extend the Child Tax Credit expansion in the American Rescue Plan, lowering taxes for middle class families by providing the families of more than 66 million kids and an estimated 10.4 million rural residents across the U.S. a major tax cut – benefitting 45 percent of children from rural areas.

Locally-Led Economic Development. Many rural economies continue to struggle with long-term job loss and economic transition. The President’s plan will create a new Rural Partnership Program to empower rural regions, including Tribal Nations and territories, with resources to attract, access, and leverage federal, private, and philanthropic resources; lead strategic and effective development projects; and create results that matter to communities.

Workforce Training. The U.S. has chronically underinvested in workforce development, and millions of jobs have been going unfilled in growing sectors such as construction and health care. Through high-quality career and technical education pathways and Registered Apprenticeships, President Biden’s Build Back Better Agenda will invest in training programs that will prepare millions of American workers for high-quality jobs in growing sectors.

Investments in Teachers and Schools. Even before the pandemic, our schools faced an estimated teacher shortage of 100,000, undermining the education of our children and students of color in particular. Rural teachers have an average starting salary that is more than $7,000 less than their suburban counterparts. President Biden’s Build Back Better Agenda will upgrade school infrastructure, address teacher shortages and improve teacher preparation, expand free school meals to an additional 9.3 million children during the school year and help families purchase food during the summer.

Read about the President’s full Build Back Better Agenda here.