We need to protect our land and water. Scientists say land conservation is needed to safeguard and preserve our health, food supplies, biodiversity, and the prosperity of every community. Land conservation is also critical for our country to take action on climate change.

President Biden has signed an executive order directing the Department of the Interior to create a report on the America the Beautiful plan that would begin to lay out a plan to conserve 30 percent of our water and land by 2030 (30 x 30).

The Department of the Interior recently released a 24-page preliminary report on the America the Beautiful Plan.

Under the direction of President Biden, the Department of Interior and Department of Agriculture are engaging stakeholders across the board, including agricultural landowners, outdoor enthusiasts, sovereign Tribal Nations as well as states, local officials, and others to identify strategies that reflect the priorities of all communities as we work to conserve our country’s public and private land for generations to come.

You can read details of Biden’s plan here.

Farmers and ranchers are always the best caretakers of the land. This is true for Tribal Nations as well. Those who live and work the land know how to take care of it for future generations. Land conservation programs work best when landowners, conservation groups and the local, state and federal governments work together. This is what the Biden administration believes and how the program will be implemented.

I urge people to educate themselves and study the issue. There is a lot of misinformation being tossed around by opponents of the plan.

The plan has been praised by:

There are many detailed articles on the plan to be found from groups such as the Natural Resources Defense Council, the Land Trust Alliance and National Geographic.

There is also a “What They Are Saying: “America the Beautiful Initiative” paper.

Groups have certainly weighed in with the White House and other federal agencies. As programs start to get developed using the framework set out in America The Beautiful, groups and landowners will continue to be consulted.

America the Beautiful at a Glance 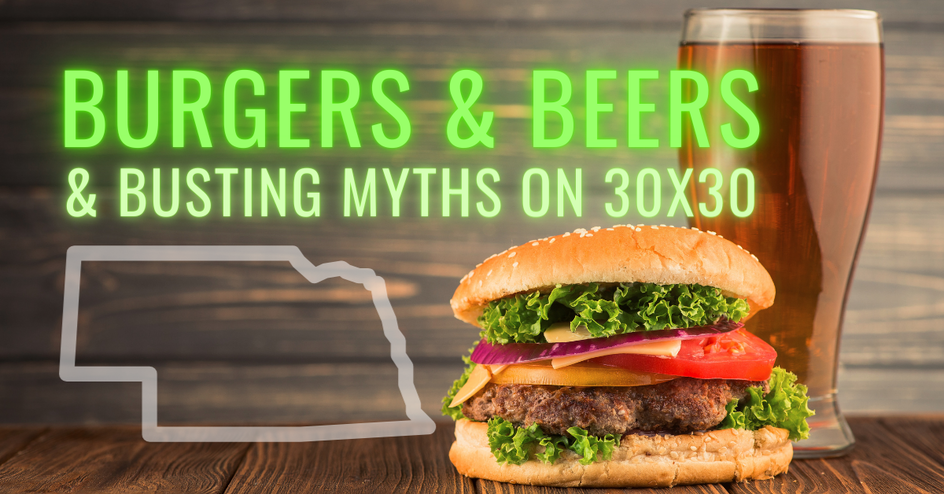 We are holding a series of Burgers & Beers events across the state, where we will discuss the myths Gov. Ricketts and others are spreading about the 30 x 30 plan.

We are creating the schedule now across Nebraska, so sign up here if we don’t have a Burgers & Beers event yet in your community.

We have had eight events! More are planned. Check back later.

Unfortunately, Ricketts and many in the Republican Party are using fear-mongering to spread misinformation about the plan.

Ricketts had a series of so-called “Town Halls” to spread his lies about the plan, but Dems showed up and called him out for his lies.

So did the Lincoln Journal Star in an editorial: Biden’s ’30×30 plan’ is no land grab, would be good for Nebraska.

Download a flyer you can distribute showing the truth about the 30×30 plan. Share this flyer with your friends to help us get the word out.

Use this blog to write a letter to the editor. Unlike fossil fuel projects, like the Keystone XL pipeline, where private land was taken by a corporation and the state of Nebraska under Gov. Ricketts with eminent domain, not a single parcel of land will be taken by eminent domain for the 30×30 plan. This is a voluntary program. Let me repeat, nobody would lose private land with Biden’s conservation plan. The effort to protect more land is very similar to what groups like Ducks Unlimited do with landowners, farmers and ranchers.

Watch this video to learn more about the America the Beautiful plan.