President Trump has had some bad days of late.

Thursday might have been the worst yet, as the U.S. Supreme Court ruled that New York prosecutors can access Trump’s tax returns and other records as part of a probe into alleged shady financial deals by the Trump Organization.

Esquire’s Charles Pierce, like many, took great delight in the ruling.

The Supreme Court on Thursday did what most people expected it to do on the matter of El Caudillo del Mar-a-Lago’s financial records. It denied Congress’s attempt to subpoena the material, but it did rule that New York County DA Cyrus Vance, Jr. one day could go gamboling through the vast vista of scams and grifts and frauds likely contained therein. Indeed, in ruling in Vance’s favor, Chief Justice Roberts wrote in the Court’s unanimous opinion on that point:

“No citizen, not even the president, is categorically above the common duty to produce evidence when called upon in a criminal proceeding,” Roberts wrote.

This is a major statement on presidential power and, in that regard, it can rank with US v. Nixon and Jones v. Clinton. And hooray for that. The NDP is hosting Yard Sign Drive-Through Parties to distribute yard signs for Vice President Joe Biden. Come get yours to show support! The latest projections from FiveThirtyEight.com and the Cook Political Report show we are on our way to claiming that “Blue Dot” in CD2.

This week, the Cook Report moved CD2 from “Toss Up” to “Lean Dem.” This this is big news for the Kara Eastman campaign and proves what we are seeing on the ground, momentum for Democrats.

You can help us build on that momentum by becoming a Blue Nebraska Monthly Donor!

In case you missed it, the NDP revealed on Thursday that the Nebraska Republican Party and several GOP state senators and legislative candidates have been caught playing hide-the-ball regarding more than $112,000 in contributions from the party.

The Nebraska Accountability and Disclosure Commission on July 1 sent a letter to the Nebraska GOP questioning the party’s reporting of the contributions as “in-kind” — meaning they were made in coordination with the candidates and had to be reported by the campaigns under state law.

Sen. Machaela Cavanaugh will be hosting Covid-19 listening sessions July 11 and 14 that will consist of policymakers and the people of Nebraska. The purpose of these sessions will be to provide informative dialogue to policymakers regarding your experiences, perspectives and share your stories regarding how the Coronavirus public health crisis has impacted you, your family and community. We will also be seeking guidance and suggestions for policy actions as the Legislature returns to complete the 2020 legislative session. You will be able to access these sessions live online. You can also register to speak by filling out this form: 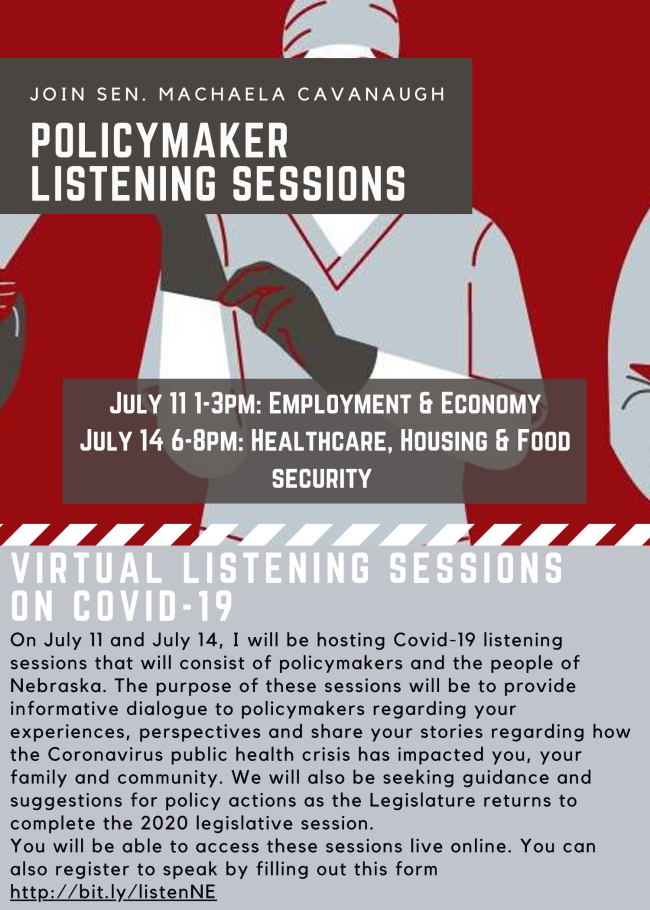 We leave you this week with a rendering by Mike Luckovich on how Trump threatened to withhold money from states to that refuse to reopen their schools this fall.