Who said it and more — #NebDems News

As you probably heard, venerable NPR political correspondent Cokie Roberts died this week from complications due to breast cancer.

Following are several quotes from past and present politicians on Roberts’ passing.

Your task? Guess which one came from President Trump:

1. She was “a role model to young women at a time when the profession was still dominated by men; a constant over forty years of a shifting media landscape and changing world, informing voters about the issues of our time and mentoring young journalists every step of the way.”

2. Roberts was “A pioneer. Relentless in her pursuit of the truth and steadfast in her commitment to breaking down barriers for women in journalism—our country is better because of it.”

3. She was “a talented, tough, and fair reporter. We respected her drive and appreciated her humor. She became a friend.”

Nothing but class — at least from three of them. Ominous and disturbing news broke this week when the Washington Post reported that a whistleblower complaint about President Trump made by an intelligence official centers on Ukraine.

The complaint involves communications with a foreign leader and a “promise” that Trump made, which was so alarming that a U.S. intelligence official who had worked at the White House went to the inspector general of the intelligence community.

Enter Esquire’s Charles Pierce, who opines on the skulduggery of the current administration better than anyone.

“One hesitates to say enough is enough but, this time, seriously, enough is truly enough. The president* — who knows nothing about anything and whose word is worthless — is promising god alone knows what to god alone knows who, but whatever it happened to be was scary enough to spook the spooks, and damaging enough to risk corrupting the usual oversight process. How much of this perilous nonsense are we willing to tolerate? When corruption and incompetence collide, there’s a lot that hits the fan.” 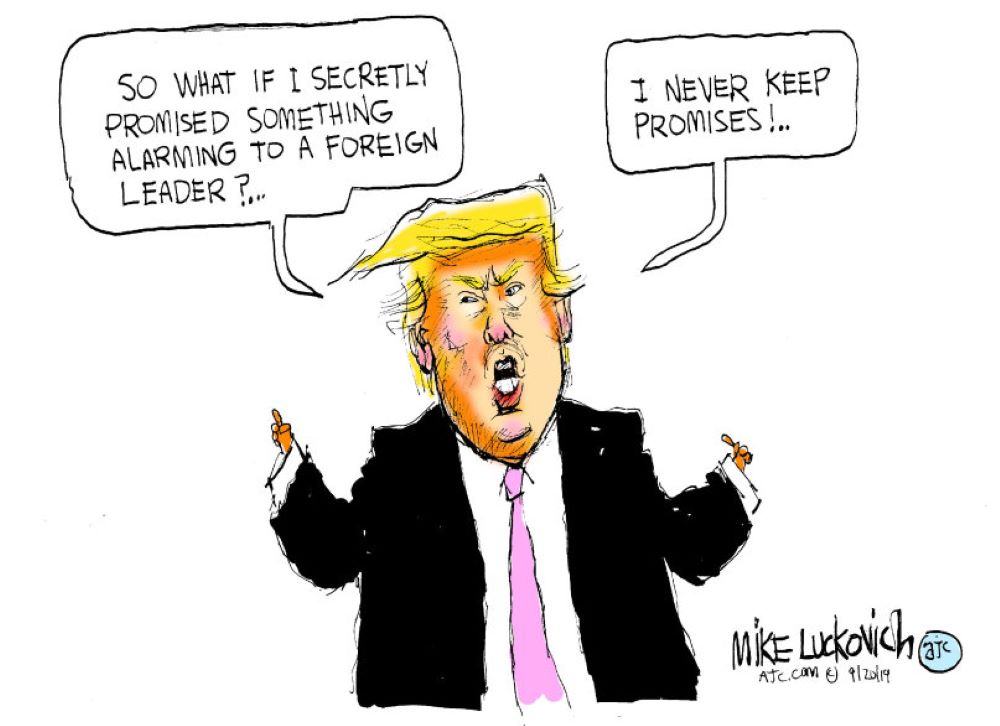 There was some good news coming out of Washington D.C. this week, when officials unveiled a towering bronze statue of Ponca Chief Standing Bear in the Capitol’s Statuary Hall.

The Omaha World-Herald noted that “the peaceful Ponca were forced to leave Nebraska and  Chief Standing Bear later pledged to his dying son that he would return to bury his body in their homeland.

Standing Bear was arrested while fulfilling that deathbed promise and was called upon to prove in court that he should be considered a person under the law. The chief argued that while his hand might be a different color, it still bled when pierced. His next words are inscribed on the black granite of the statue’s base.

“The blood that will flow from mine will be the same color as yours. The same God made us both. I am a man.” The Morrison Exon fundraising event is scheduled for Oct. 27, 2019 from 9 a.m. to 11 a.m. at the Hilton hotel (1001 Cass Street, Omaha). At the event, we present awards to hard-working volunteers and hear from state and national speakers.

Important note from the DNC Tech Team for all candidates and campaigns: In order to enhance transparency and security, Facebook is requiring ALL admins of pages for elected officials (or candidates) to turn on two-factor identification to continue posting.

Please click through here for a step-by-step in how to complete these requirements.

We leave you this week with a rendering from the New York Daily News’ Bill Bramhall about news reports that Trump indicated that Iran was behind the recent attack on Saudi oil facilities and that the United States would respond after hearing from the Saudi government “under what terms we would proceed.”