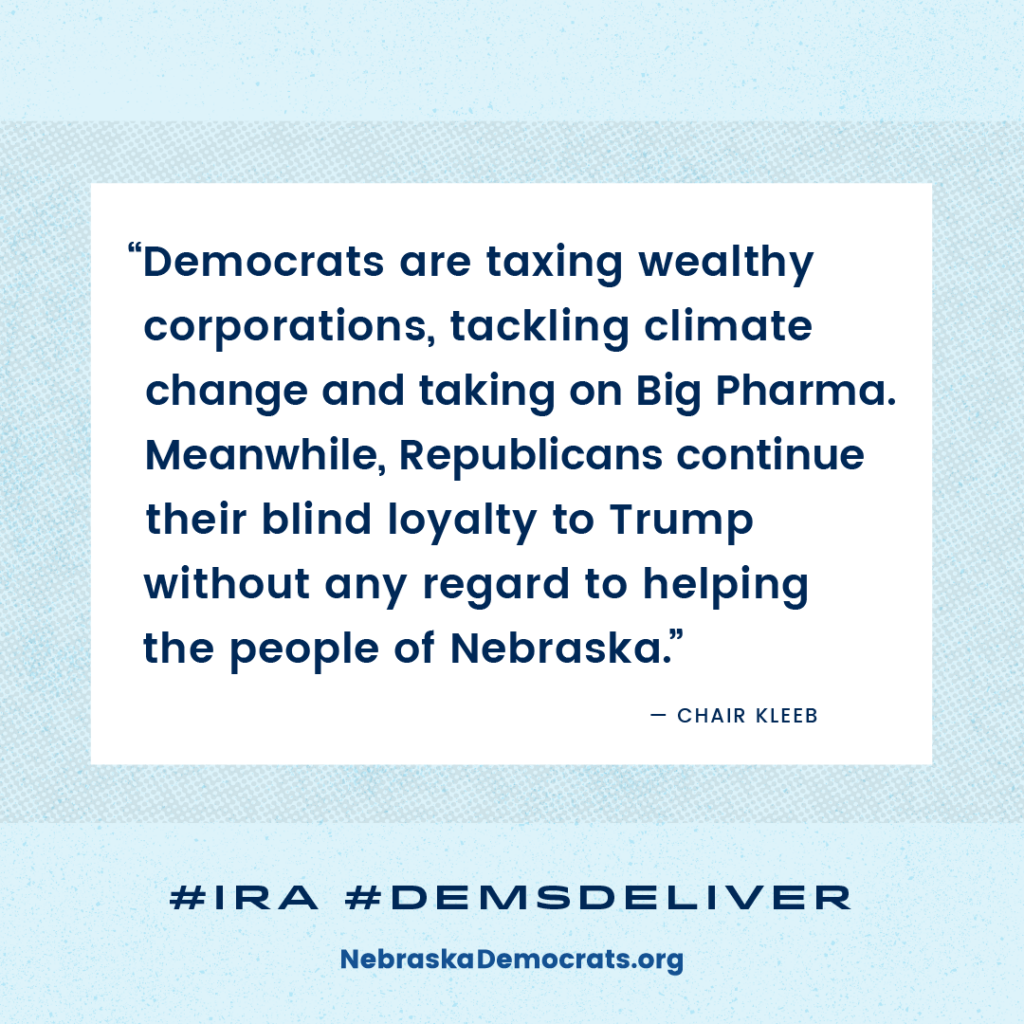 House Democrats on Friday sent to President Biden, for his final signature, the Inflation Reduction Act, aimed at lowering health-care costs, raising taxes on corporations, reducing the federal budget deficit and injecting a historic burst of cash into efforts to combat climate change.

NDP Chair Jane Kleeb called out Reps. Don Bacon, Mike Flood and Adrian Smith for standing in the way of progress and attempting to block efforts to help hardworking families.

“Bacon, Flood and Smith are spewing lies about the Inflation Reduction Act in a feeble attempt to distract from the fact that they sided with special interests instead of voting to lower costs for working families,” Chair Kleeb said. “The bottom line is this: The Inflation Reduction Act will make sure big corporations and wealthy tax cheats finally pay what they owe — and families making below $400,000 won’t pay a penny more in taxes.”

She noted that the bill will mean $20 billion going directly to family farmers and ranchers to help with the climate crisis for programs like land conservation, water sensors, and no-till farming.

“Democratic leadership on this bill will allow the government to negotiate prescription drug prices with big pharmaceutical companies for families on Medicare and Medicaid. Unfortunately, Sens. Ben Sasse and Deb Fischer last weekend helped block a provision that would have made insulin accessible to every Nebraskan for only $35. The Republican party simply does not care about the people,” Chair Kleeb said.

“Democrats are taxing wealthy corporations, tackling climate change and taking on Big Pharma. Meanwhile, Republicans continue their blind loyalty to Trump without any regard to helping the people of Nebraska.”

Dubbed the Inflation Reduction Act of 2022, the bill passed Friday on a 220-to-207 party line vote. The package will authorize the biggest burst of spending in U.S. history to tackle global warming — roughly $370 billion to reduce greenhouse gas emissions to 40 percent below their 2005 levels by the end of this decade. The proposal also will make good on Democrats’ years-old pledge to reduce prescription drug costs for the elderly.

In part by tweaking federal tax laws — chiefly to target tax cheats and some billion-dollar companies that now pay nothing to the government — the bill is expected to raise enough money to cover its new spending. Democrats say the measure is also expected to generate an additional $300 billion for reducing projected budget deficits over the next 10 years, though they have not yet furnished a final fiscal analysis of their legislation.