Wednesday’s impeachment proceeding in the U.S. House was like a Hallmark holiday movie: We all knew how it would end. But we watched anyway.

The Republicans huffed and puffed and howled and yowled in protest.

And pound the table Republicans did

After the House eventually voted to impeach President Trump, venerable Esquire scribe Charles Pierce weighed in — as only he can:

It was not a debate. It was a discussion. Its conclusion was a foregone conclusion. But the comprehensive view that we got of the scalded wasteland that is the modern conservative and Republican political mind was breathtaking.

We speak often in the shebeen of the prion disease, but Wednesday’s proceedings was the most vivid diagnostic look at it that we ever had.

The Founders and the Savior, both marshaled in defense of an irreligious fiend as some kind of political avatar. Goats, and Jehovah. 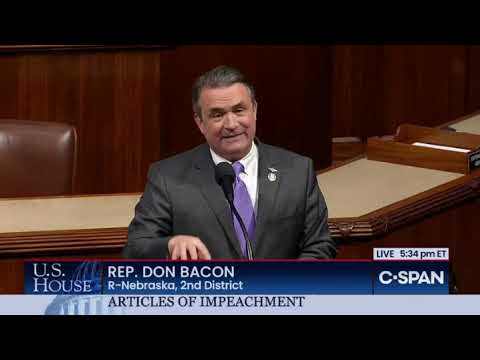 Speaking of impeachment, hundreds of people participated in Impeach Trump rallies Wednesday in Lincoln, Omaha and Grand Island to send a message to Reps. Don Bacon, Jeff Fortenberry and Adrian Smith to support the impeachment vote in the U.S. House of Representatives.

The rallies were part of a nationwide effort. The non-partisan Nebraska rallies were organized by Not Above The Law Omaha, Indivisible Nebraska, the Nebraska Resistance Calendar and Central Nebraska Peace Workers, a chapter of Nebraskans for Peace. Tomorrow in Papillion is the first in a series of NDP Delegate 101 trainings for people to learn how to become a delegate to the Democratic National Convention. The delegate process is a bit complicated at first glance, but we want you involved and to understand the steps. And another worthy event tomorrow. The Nebraska Democratic Party is here to help you navigate all the forms you need to file if you are running for office. Our team can meet with you to answer questions and help you get started.Just email [email protected] and a team member will get back to you. Programming note: #NebDems News, like all of you, is taking time off and will not be published next week. It will return on Jan. 3. We leave you this week with a rendering on the rot in Washington D.C. by Mike Luckovich.