OMAHA, Neb.—The Nebraska Democratic Party and the Democratic National Committee (DNC) will host “Come Together, Fight Back, Vote Democrats,” on April 20 at the Baxter Arena, a rally in support of Democratic candidates in Lincoln and Omaha city elections.

The rally will feature remarks from Senator Bernie Sanders, Democratic National Committee Vice Chair Rep. Keith Ellison, Omaha mayoral candidate Heath Mello and State Democratic Party Chair Jane Kleeb. The rally is part of a national tour sponsored by the DNC to connect with local elections and the grassroots base of the party.

Media interested in covering this event must complete this form with tech specifics needed–the form must be completed by Monday at 5pm CT: http://tinyurl.com/NebDemPress.

More than 4,000 tickets have already been reserved for this event. Anyone who would like to sign up for a free ticket can receive one in person at the Baxter Arena Box Office (2425 S. 67th Street), Monday through Friday from 10 A.M.-6 P.M. or online at universe.com/nebdem.

Media interested in covering this event must complete this form with tech specifics needed–the form must be completed by Monday at 5pm CT: http://tinyurl.com/NebDemPress.

Our team will email all press who RSVP load in time, parking and other details on Wed. 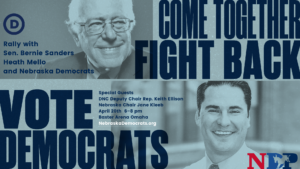